“A slab of pure gold measuring about 45" x 27" which sat atop the Ark of the Covenant ... was the base for the golden cherubim and symbolized the throne from which God ruled Israel.  On the Day of Atonement the high priest sprinkled the blood of a sacrificial lamb on the mercy seat as a plea for forgiveness for the sins of the nation.  The Hebrew word [mercy seat] means literally ‘to wipe out’ or ‘cover over’….  ‘Mercy seat’…based on the earliest Greek and Latin translations…has been replaced as the symbol and place of God’s presence and atonement” by “Christ’s cross and resurrection" which "showed the perfect presence and accomplished atonement once for all….”(Mercy Seat, Holman Bible Dictionary, Editor:  Trent C. Butler, PHD., Holman Bible Publisher, 1991, p. 947)

“Jesus Christ…was the ultimate manifestation of God’s mercy, the assurance of that mercy for believers, and the basis of their own mercy in their relationships with others.” (Mercy/Merciful, Holman Bible Dictionary, Editor:  Trent C. Butler, PHD., Holman Bible Publisher, 1991, p. 949)

I was sent by the Lord to paint the mercy seat at a gathering of intercessors representing the Body of Christ in our state and nation.  One of the things that took place at that meeting was a heartfelt repentance and reconciliation among those present to bring healing and restoration to the body beginning with the intercessors.  The prophetic message I was given to share through the painting was one of unity and single focus on the mercy and glory of God. We were to pray that this would begin to be the governing factor in the body of Christ at large.  As the cherubim or covering angels are of one heart and one mind focused on the presence, power, and love of God, they represent two individuals in perfect unity.  While their wings form a heart shape pointing up toward God, the radiant glory around the merciful and victorious cross of Christ gives the impression of a heart pointed down toward us.  I believe it is the Lord’s heart for us to be cleansed of all issues that might hinder His love flowing to us and through us first to each other in the church and then out to the world.  His blood was poured out for this purpose and it is His blood on the mercy seat that is the final atonement and covering for all sin, for all time.

With that in mind, we must ask ourselves:  Is there anything in us or in our relatedness with others that might not line up with His mercy flowing freely through us? Is there any division or lack of unity in us, or amongst the body of Christ, the church? This cannot be if we are to be one body with many parts glorifying the King of Kings and Lord of Lords. Around the top of the ark the craftsmen were instructed to create a crown. As I began to paint that part, literally on my knees, I kept hearing the Old hymn, “Crown Him with Many Crowns.” So I played Chris Tomlin’s version on his “Burning Lights” CD titled “Crown Him (Majesty)” (with Kari Jobe) for inspiration. I felt like the Lord was saying that nothing in our lives should be lifted up, given importance or power over Christ and what He mercifully suffered on the cross and accomplished for us through His shed blood. Crown Him above all things. In every situation, He is Our Creator, Savior, Healer, Deliverer, and Prince of Peace. He is the Life, the Light, and the Truth. He is our Righteousness, Vindicator, Provider, Protector and so much more.  He is Majesty, Lord of all.  Let every throne before Him fall. His presence, His power, His mercy, His glory requires our focused worship and provokes us to Holy reverence.

Possession of the Ark of the Covenant, in old Testament times, was either a blessing or a curse. It depended on the hearts of God's covenant people and their reverence toward a holy God. In I Samuel 4-6 the elders of Israel and the sons of Eli, the priest, irreverently and superstitiously took the Ark of the Covenant into battle with the Philistines.  As a result, the Ark was taken, Israel was defeated, 30,000 foot soldiers were slaughtered, and Eli’s sons died. Upon hearing the news, Eli fell backward off his seat at the city gate, broke his neck and died. His pregnant son’s wife went into labor and gave birth to a boy she called Ichabod because, “She said, ‘the glory has departed Israel, for the ark of God was taken’” (I Samuel 4:22). God had been very patient with Eli and his irreverent, rebellious sons, but the time had come to deal with this destructive situation. He told His prophet, Samuel, to tell Eli, “…I am about to judge his house for the iniquity which he knew, because his sons brought a curse on themselves and he did not rebuke them.” (I Samuel 3:13)

God's divine judgment was also experienced by the Dagon worshiping Philistines who had taken the ark. Soon their own priests advised their leaders to send it away with guilt offerings of golden tumors and golden rats representative of the plague and infestation that had come upon them. The purpose of this guilt offering was to give glory to God and hopefully He would lift His hand of judgment. A burnt offering was made to God when the ark arrived in a levitical city of the Israelites,  but 50,070 men were struck down there for looking into the ark. The remaining men said, “Who is able to stand before the Lord, this holy God? And to whom shall He go up from us?” (I Samuel 6:20) From there it went to the house of Abinadab on the hill who consecrated his son, Eleazar, to keep the ark of the Lord. It remained there for 20 years until all Israel lamented after the Lord.

“Then Samuel spoke to all the house of Israel, saying, ‘If you return to the Lord with all your heart, remove the foreign gods and the Ashtoreth from among you and direct your hearts to the Lord and serve Him alone; He will deliver you from the hand of the Philistines’” (I Samuel 7:3). In response, Israel repented, was delivered, and God protected them from the Philistines. God also restored the cities that had been taken from them and there was peace between Israel and the Amorites.

Through these and many other Old Testament accounts, we see that the Ark of the Covenant and the glory or presence of God was such a holy, fearsome and powerful thing that not everyone lived to tell about it. Today, however, because of Jesus sacrifice, the glory of God dwells in His people. Imagine that! We are His chosen carriers. The glory of God, no less holy, no less powerful, or fearsome, dwells in us. A doctor, that I know, describes the sphenoid bone, as a structure in our heads that resembles the mercy seat. She says its shape simulates the wings of the cherubim over a cradle or seat. The pituitary, or master gland of the endocrine system, sits on this seat sending and receiving messages to and from the entire body.  Occasionally, tumors are found on this seat that try to displace the master gland or block the healthy flow of messages thereby harming many parts of the body. Could there be a correlation in this to when the ark left Israel with the Philistines and their being cursed with tumors? Corporately consider the correlation to the body of Christ, the Church? I believe the Lord wants His people to repent just like when Samuel instructed the Israelites who were lamenting for the Lord in their midst.  He longs for each of us to come to a place of unity with Him and, therefore with each other, in oneness of heart, mind, and spirit where nothing is elevated above His glory or sitting on the seat of His mercy in us except His loving kindness. Freely we have received and freely we are to give. Preferring above all else to glorify Him in our expressions of His love to one another and to the world. Like the cherubim, we must be of one mind, one heart and one spirit. United we stand in holy reverence refusing to allow anything to distract us from the glory and the mercy of God.

Is it possible? We choose and do our part and God does His by the transforming power of His Holy Spirit. As a confirmation of this, the following is a prophetic word given to me by one of our precious sisters in Christ at the Pray Georgia conference where I began this painting. She also gave me her worship flag of many colors in the shape of an angel’s wing to be kept with the painting. I believe it is all part of the bigger picture God wants us to see.

“The vast array of colors represent that His covenant with us still stands. There will be a covenant gathering of His heart and ours. If we will stand with Him, we will unite our hearts together and bring unity to the body; and he will be our God and we will be His people.” (given by Cherie Hodge)

Also, please check out greaterglory.today  to see the official website of Author, Bev Weddle whose latest, excellent and inspired book, GREATER GLORY, Priestly Intercession, has "The Mercy Seat" painting on its cover. You'll be very glad you did. 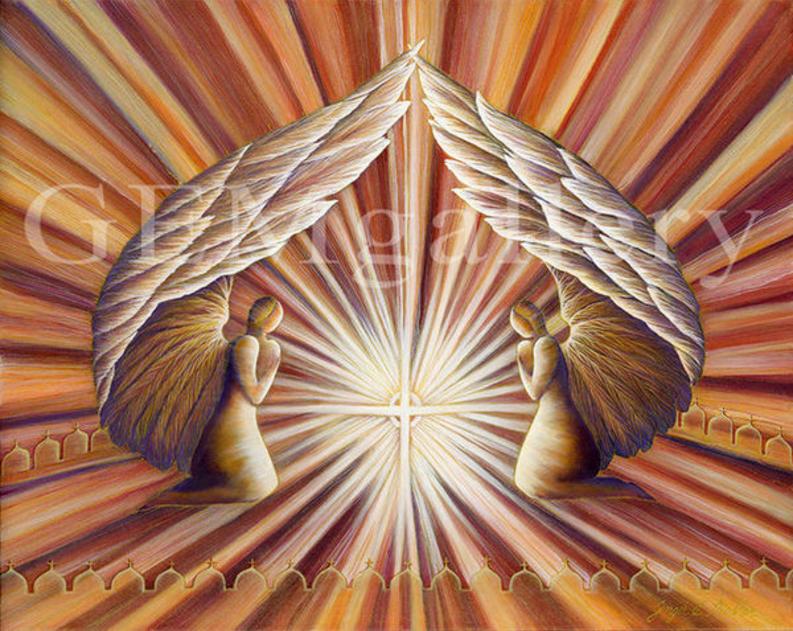