“The Spirit of the Lord God us upon Me, because the Lord has anointed Me to preach good tidings to the poor; He has sent Me to heal the brokenhearted, to proclaim liberty to the captives, and the opening of the prison to those who are bound; to proclaim the acceptable year of the Lord, and the day of vengeance of our God; to comfort all who mourn, to console those who mourn in Zion, to give them beauty for ashes, the oil of joy for mourning, the garment of praise for a spirit of heaviness; that they may be called trees of righteousness, the planting of the Lord, that He may be glorified” (Isaiah 61:1-3 NKJV).

As you observe “The Christmas Story” and read its message, be encouraged—the Lord is here for you. In Matthew of the Bible it is written, “The virgin will conceive and give birth to a son, and they will call him Immanuel (which means ‘God with us’)” (Matthew !:23 NIV). God is with us and for us. Amen and so be it! He did not come to condemn but to restore, heal, and comfort—to set the captive free. “For unto us a child is born, unto us a Son is given; and the government will be upon His shoulder. And His name will be called Wonderful, Counsellor, Mighty God, The Everlasting Father, Prince of Peace” (Isaiah 9:6 NKJV). That is the story of Christmas!

It was just ​two weeks before Christmas when I was sent to paint a three-way broken heart at our local coffee shop. Without knowing how I was supposed to render that image on canvas, I trusted the Holy Spirit to empower me to accomplish His intended purpose. As I prepared to paint the painful subject I had been given—in the midst of the Christmas cheer—I leaned not on my “own understanding” (Proverbs 3:5 NIV) but fully relied on the wisdom of God.

Looking back, I realised I had been pondering the song “Away in a Manger” and thinking about the reality of its lyrics—that Jesus had come from holding the universe in His hand to being confined in Mary’s dark and cramped womb until the time of His birth in a nasty, smelly, fly infested stable where He was put in a filthy, saliva coated trough on top of coarse, prickly hay. He could have turned back at any time and said forget this—forget them—no way—not me—not ever! But, that is not the way it happened. He came as a servant and a Savior to set us free; to help us; to deliver us from destruction; and to heal our broken hearts.

Throughout the night—as I painted a three-way broken heart—people of all ages (ranging from 8 to 90) came over to me and whispered, “You know I’ve had a broken heart.” It was a priceless and precious thing the Lord was doing. You could almost say it was a holy night as He ministered to those whose hearts had been broken. It seemed everyone had a story to tell and could relate to the unfinished image on the canvas. Even a local poet shared his poem about having a broken heart with all who were there.

Still, at the end of the evening, I went home a little frustrated and even embarrassed by my unfinished work of art. In my opinion, it was an unsightly mess—but no one else seemed to mind. Since His ways and thoughts are always higher than mine, I asked the Lord why He hadn’t enabled me to finish it. He simply replied that the people needed to have the condition of their hearts acknowledged. With that said and done, I passionately continued to paint through the night toward its completion. In the morning light, I stepped back to see what had been accomplished and was in awe of what I saw. Maybe you see it too!

The canvas around the heart appears to be opened up or cut away like skin being surgically removed to reveal a three-way broken heart. On the upper left side of the heart is a star in the midnight blue sky similar to the one over Bethlehem that announced the birth of our King, Christ Jesus. Over the star is a sort of covering or overhang suggesting a shelter. Considering that Christmas was only two weeks away, could this star and shelter be telling of the Savior’s birthplace? On the upper right side of the heart, there appears to be the image of an embryo in the womb in its early stages of development. Could this be symbolic of Jesus's birth? The bottom part of this three-way broken heart looks like a marble slab or some type of stone. Ezekiel 11:19-20 (NIV) says, “I will give them an undivided heart and put a new spirit in them; I will remove from them their heart of stone and give them a heart of flesh. Then they will follow my decrees and be careful to keep my laws. They will be my people, and I will be their God.”

Prophesying about Jesus our Savior—who heals the broken hearted—Isaiah said, ​ 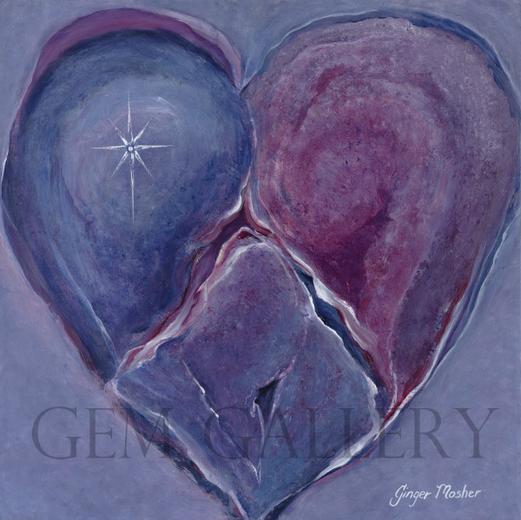