A bit concerned about the seriousness of the subject matter, I began to paint “Mantels of Martyrdom” at the “Contending as One” seven state assembly in Cartersville, Georgia.  My concern, however, quickly turned to amazement when I heard Cindy Jacobs calling out, “Where are the Lottie Moons of today … the ones who will go to China?” You see, China was exactly where I had seen Jesus, in a dream, sending the three men already sketched on the canvas.  From that point forward, it filled me with great joy to witness Holy Spirit orchestrating and confirming with every beautiful song, powerful prayer and excellent word, the message I was painting.

Looking from left to right or, more appropriately west to east, the painting and its message begins with three men kneeling in reverential silence as Jesus tenderly and compassionately acknowledges their beaten, bruised and burned backs.  He understands their sufferings and the price they’ve paid for being His witnesses, His martyrs.  Yes, martyr which, by the way, only meant “witness” in its original Greek form.  Persecution and death were not even associated with the martyr’s original purpose. Nevertheless, as seen on the backs of these three men, some degree of persecution and even death, as we all know, often follows the one bearing light in a dark place.  In spite of this, when Jesus stands before them they rise up, once again, to go wherever He sends them....even China, a place of great need and probable persecution.  But first, He places over their heads a mantel shimmering with the energy and power of Heaven.  While uniting them as one in heart and mind and purpose, its loosely woven threads, also, give them the freedom and flexibility to fulfill their own uniquely designed callings and destinies. The “colors of Heaven,” reflected in the purple, turquoise and white threads, signify that they are His kings and priests, a holy nation.  When I asked Jesus what He had placed over their heads, He answered, “mantels of martyrdom.”  Then, as I saw the three martyrs moving eastward under the mantel, they became one very large mountain.  Its backside bore not only their scars, but also the blood of the martyrs before them.  They were contending as one and shining with the glory of God.  The ground under their feet was holy.  We, too, are standing on holy ground and the chance to live and die for Christ is ours.  Great joy lies ahead for those who choose to be His witnesses, His martyrs.  The whole earth is crying out for us to rise up and all of Heaven’s witnesses are cheering us on, especially Jesus!  On those who are willing, He is placing His “mantels of martyrdom.” 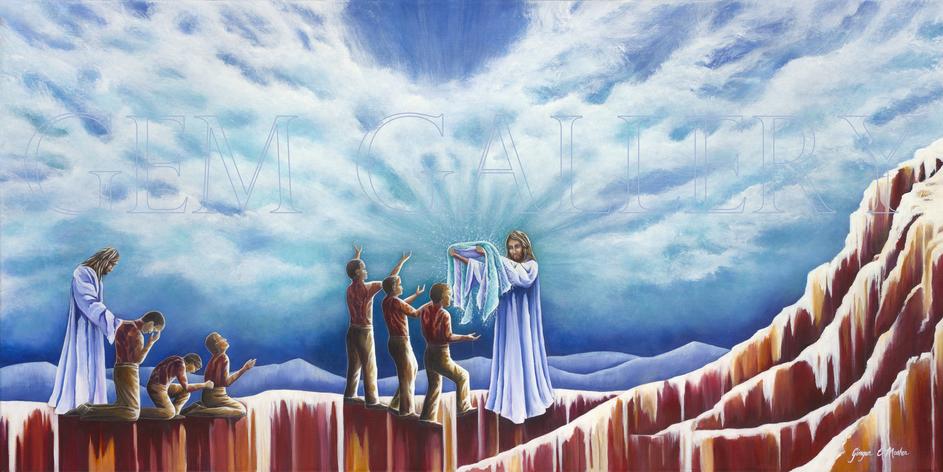