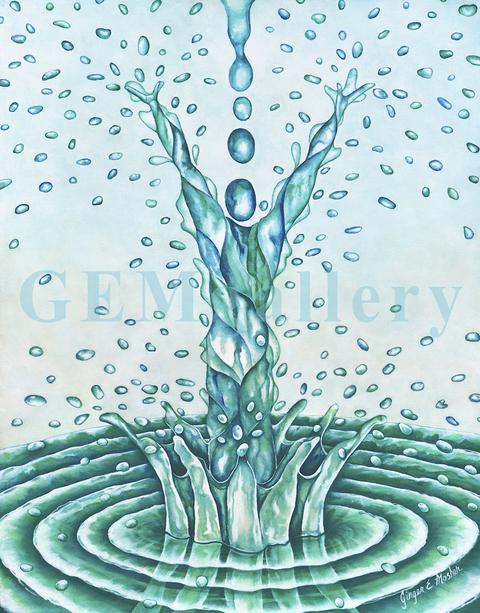 In passing one quiet morning, I thoughtfully paused before one of my prophetic paintings — “Waters in the Wilderness.”* As I felt its texture with my hand, my thoughts and concerns were of dear friends fighting diseases, families plagued with problems, and our nation in turmoil. Fully aware of the painting’s message of hope (based on Isaiah 41:17-20 and 43:19-20), my voice broke through the silence with what I presumed would be an unanswered question. “How long Lord?” (see Isaiah 6:11). I wondered how long it would be before waters break forth in the wilderness and rivers run in the desert? How long before healing, deliverance and peace come? How long before righteousness is established and restoration manifests? Thankfully, as I climbed the stairs to pray, God’s answer was waiting to be found.

I discovered it in an email — a prophetic word by Andrew Towe titled, “From Drought to Deluge: A Geyser in the Spirit is Bursting,”**  It began by retelling the biblical story of when God brought forth water from the hollow place of an ass’s jawbone in answer to Samson’s cry of thirst. (See Judges 15:16) I was surprised to read this, because it reminded me that my son’s name means “from the little hollow” and  I thought about the amazing stairstep water fall with artisan-like springs he was presently creating in his front yard.

Then I remembered two visions which I painted to prophesy over his property prior to his ownership. One was of Jacob’s well; the other was a watery rendering of Jacob’s ladder resembling a stairstep waterfall. At the time of these painted prophetic visions, I watched many slow-motion videos of water droplets falling into a pool of water. The effect one single drop of water has and the reaction it causes is quite beautiful. Over a decade later, Holy Spirit would use these visons and videos as inspiration for “Living Waters.”

But first there was more to read in Andrew Towe’s word about geysers bursting forth. In confirmation to my morning pause and question, “How long Lord?” — I saw that he quoted the very scripture on which my “Waters in the Wilderness” painting is based. So, I reread the painting’s story and remembered that its inspiration began at “Dry Falls,” in Highpoint, North Carolina. To say it was dry would be a tremendous understatement. It was a deluge. And standing beside the sound of its many waters gushing forth, I prophesied on video of many people praising God and advancing His kingdom.

Years later, while listening to the sound of the many waters cascading down my son’s waterfall I realized that, collectively, we are God’s voice of many waters in the earth. And now is the time for the waters within to break forth in the wilderness to heal this parched/dry land. But first, like Samson, we thirst, we cry out to the Lord, and we ask — How long Lord? And he answers, our strength returns, and we are revived. He makes rivers of living water gush forth from within our innermost being without restriction. And those who come near get wet because we are and have “free water!”

When I first toured the revivalist's, Sam Jones, historical homeplace and museum at Roselawn, I met with a pastor who had been researching past wells of revival with the hope of reopening one in his home region. Our divine appointment started with a polite introduction, but Holy Spirit quickly moved into our midst in such a powerful way that I doubled over weeping. When I regained my composure, we discussed his research on previous revival wells and even corresponded about it later. Not until the time of this painting, did I know the purpose.

I had been preparing to paint “Living Waters” at the “2020 Awaken the Dawn” event at Roselawn and was curious why I was being sent there to paint such a modern-type painting. In answer to my curiosity, the Lord showed me how the first time I visited the revivalist’s homeplace I wept over the reopening of the wells of revival. This time, I was going to prophetically paint God’s modern-day wells of revival — His chosen, redeemed, and revived people — filled to overflowing with the fullness of God. We are His wells of revival. There is a river running through us.

When a single drop of water falls into a pool, however small or large, it has an effect. First, there is an upward response — a welling up. Then, there is an explosive reaction around where the initial drop of water entered the pool. In slow motion, it looks like a crown coming up out of the water. From all this energy in motion, the pool begins to form ripples pushing the molecules up and down all around in an outward direction.

While fine tuning the painting, after the event, I asked the Lord why I was having such difficulty with the ripples. He answered with a short phrase — “ripples in time.” So, searched it out and found a scientific theory discovered by Einstein called “ripples in space-time.”*** It happens when two black holes or stars converge and create a magnetic or gravitational ripple. I do not have full understanding about this, but the day the Lord told me “ripples in time” I was reading about a great awakening coming to the church. As prophesied by Smith Wigglesworth in 1947 and written about in R.T. Kendall’s book, “40 Days with the Holy Spirit,”****  the great awakening will come when the Word and Spirit come together. “The gospel will be restored to its ancient power.”**** “Holy Spirit will awaken the church.”*

The Word and the Spirit….in the beginning…creation…man…ripples in time. Have we been created for such a time as this? Have we come to the fullness of time for a great awakening? He has set eternity in our hearts. We are not of this world. We are eternal springs created to make ripples in our space and time to advance His Kingdom. To draw all men to drink of His free water. One omni-potent eternal drop is all that is needed. One drop of living water changes everything. An eternal spring is welling up within. When I shared the message of the painting at the “2020 Awaken the Dawn” event, I was so full of joy I could not contain it. From weeping over wells to joy-full laughter, a geyser in the spirit is bursting forth.