“Like a fruit tree among the trees, so is my loved one among the young men. With much joy I sat down in his shadow.  And his fruit was sweet to my taste. He brought me to His special large room for eating, and his colors over me were love. Make me strong with cakes of dried grapes. Make me strong again with fruit, because I am sick with love. Let His left hand be under my head, and his right hand hold me close” (Song of Solomon 2:3-6 NLV).

“He has brought me to his banquet hall, and his banner over me is love…” (Song of Solomon 2:4 NASB).

​In contrast to what you might be thinking after reading the verses of this love poem, “His banner over me is love” is actually referring to a military banner of strength and protection. When we come to His banqueting table or His vineyard, we are highly favored, abundantly blessed, and fiercely protected. It is a grand and majestic place where we are celebrated and refreshed. It is a place where we can be confident that His love conquers all!

Before I was there in person, I was there in spirit. In a vision, I saw His banner of love blowing in the wind until it came to rest on an old fence near an open gate with a pathway leading to the mountains. It was a picturesque vision which I pondered and studied, but weeks passed before I was impressed to paint it. As soon as “His Banner of Love” was finished, my family and I left to attend an event on top of Mt. Cheaha in Oxford, Alabama. It was there that I understood the significance of the vision and the timing of its visual declaration on canvas.

The event was called “Thunder on the Mountain”* hosted by Ray Hughes, founder of Selah Ministries.** The strategy for the event was to “Say, Pray, and Play.”* Accordingly, we were gathering to “say” by singing, speaking, declaring, and prophesying the word of the Lord. We were there to “pray” to receive the strategy of Heaven and to “play” to release the sound of drums thundering into the Heavens toward the enemies of God. Hundreds of prophets, intercessors, drummers, and percussionists gathered on the mountaintop for the purpose of sending a Holy Spirit inspired whirlwind of sound out of the South in order to effect change in the spiritual climate of the nation. Mt. Cheaha—which is the highest point in Alabama—is located in the path of what is described as a “wind highway” that blows all the way from Mobile Bay to Maine.

Prior to attending “Thunder on the Mountain”* with my family and climbing the historical lookout tower on the mountain, I had no idea the painting was related to the event. However—as we admired the panorama from the lookout tower—we were astonished to see in the clouds before us an exact replica of the mountains I had just painted. It was so unmistakable that everyone—who had seen the recently finished painting—recognized it in the heavenly view before us. While we were strategically gathering to “Say, Pray, and Play” with the sound of war drums all around, the Lord was saying that His military banner over us is love. It made me wonder at the power of His love! On the banner in the painting—written in Hebrew—are the words, “I am my Beloved’s and He is mine” which reminds me of the song “His Banner Over Me.”*** Can you hear the thunder of His love over you? His enemies certainly can! His love surrounds us like a protective fence or barrier fiercely declaring that we are His. Thank God that His banner over us is His mighty Love!

His Banner of Love 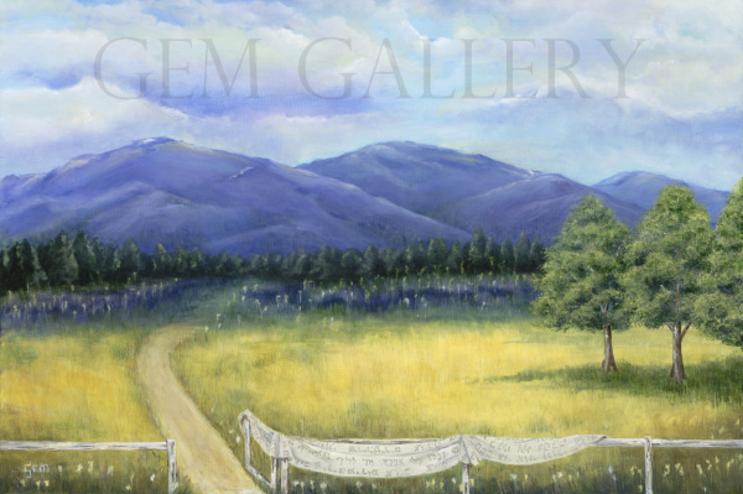