With nervous, but excited anticipation—I gathered my supplies for my first public painting appearance across town.  It was the night of October 31st, 2005. When I arrived to paint at the Christian coffee shop something happened that caused me to know this would be a night to remember. Fully relying on the Holy Spirit to lead and anoint me, I set up my easel, with bold timidity, in the dimly lit, back corner of the coffee shop beside a man-made waterfall. I could barely see what I was doing—but I felt the Holy Spirit begin to flow through me as I painted. The children, who gathered around to watch, were fascinated and so were the adults who came to look. Without any foreknowledge of the prophecies given by the Christian prophet, Kim Clement, regarding an “unusual occurrence on October 31st”—it appeared I was painting an approaching fireball shooting through space.

A couple of weeks later, I received an email with two internet postings telling of what prophet Kim Clement had prophesied—at two different times and locations—for that specific night. According to the first, October 17th, 2005, posting—Kim Clemet had prophesied live on TBN September 28th saying, “Something Unusual Is Going to Happen on the 31st of October.”* The second post, on November 10th, 2005—recorded that he had previolusly prophesied at Cornerstone Fellowship in Frederick, Maryland saying— “there would be an unusual occurrence on October 31st, which would be followed by a four-year season of harvest and the greatest move of the Spirit our nation has ever seen.”* In response to the prophesy, the posting goes on to say— “we decided to pray as a church through the evening of October 31st, standing for the Lord’s promises to be fulfilled. Just after 9:00 pm, while we were worshipping and praying, we experienced an unusual occurrence. A few of the intercessors saw a huge fireball passing through the skies of Frederick!”** and “Television news reported that the fireball was actually a meteor, seen from Philadelphia to south of Washington, D.C. Local 911 emergency centers were overrun with calls, and in the metro D.C. region, many reported the fireball was so bright it lit up the insides of their homes. One NASA scientist told a D.C. television station that ‘this was a rare event,’ and that he couldn’t remember seeing another meteor this big in the past 12 years.”** Having read this, I looked for more information and found that a Science @ NASA website also reported— “a fireball…around 9pm on Halloween (October 31st, 2005) and this meteor was so bright it made me lose my night vision.”***

Considering all that was prophesied and reported, I realized how the Lord had led me to participate by visually proclaiming—with paint on canvas—His prophetic message. The prophecy and the comet foretold of “the greatest move of the Spirit our nation has ever seen”* which, I believe is still to come and is the reason why—after having finished the “Fireball" painting—I proceeded to paint “Waves”**** of the Spirit rolling in on a second canvas. It was truly an event to remember and to eagerly anticipate! What a great blessing it is to be part of something bigger than ourselves. May the Lord continue to send His brilliant and fiery light — to light up the darkness and bring in the harvest with the waves of His Spirit coming through His people. 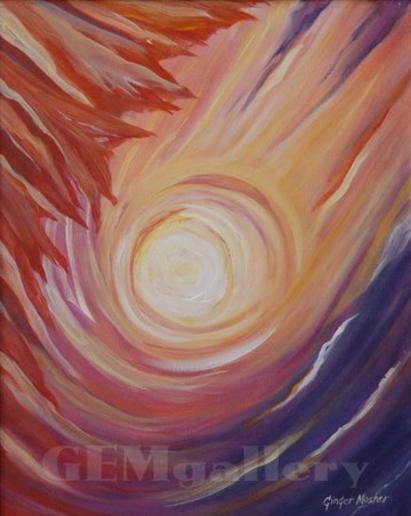