​You have received an invitation. You are invited—and what a “Divine Invitation” it is—to come to a place where heaven, sea, and land meet. A place where that which is earthly and all that is heavenly agree. In spirit, we, the Bride of Christ, are seated with the Groom in the heavens as we live out our lives on earth in the physical. Since we are triune beings—made with a body, soul, and spirit—it is important that all three agree with each other and with Christ. But, do our earthly parts always agree with our heavenly parts? I believe there is a call coming from heaven, even from our own spirits seated there, to come together as one in Him, as He and the Father are one. Listen! Do you hear the invitation? It is for you. It is for the saved and the unsaved. “The Spirit and the bride are saying “Come!” In response, Jesus says He is coming quickly. And we say, “Amen. Even so come, Lord Jesus” (Revelation 22:12-21 NKJV).

Prior to painting “Divine Invitation,” I was led in the dream up a stairwell with a sloped ceiling to an attic where I found a large canvas. Still in the spirit, or dream, I carried the canvas back down the stairs without knowing why. In real life, I had felt a stirring to paint green pastures and a gateway to heaven as two individual pieces of art. A few days later, to my surprise, I found in the back of my grown son’s former closet a large forgotten canvas, which had been bought years earlier but had never been used. (Did I mention that my son’s former room was upstairs and his closet just happened to have a sloped attic ceiling?) I knew this was the canvas of the vision, but its frame was warped. Even though I was unable to straighten the frame out, I knew God had a powerful plan and beautiful purpose for this blank warped canvas. Selah! I put the warped canvas on the easel to paint.

That night, the son I mentioned earlier came by for a visit and decided to play the piano. My son has an incredible gifting from God to site read, play, and compose music on, what I consider to be, the level of Chopin, Rachmaninoff, Tchaikovsky, Beethoven, or Mozart. Seriously, I’m not just a proud mom. He’s been proclaimed in the local news as a child prodigy, has won awards and scholarships, and has had amazing public performances, all with only a couple of years of formal training. But here’s the twist, the turn, the warp, if you will. Along the way, his gifting took a back seat as he focused, rightly so, on marriage, family, and business. Therefore, when he sat down to play the piano, I began to paint with great joy. It was a new composition just flowing out of him, and the flow of the Spirit through him was awesome and wonderful. I didn’t think. I just painted. It was so good to be painting to the music of heaven again. It was like a beautiful symphony of living music and color.

When my son stopped playing, I stood back and saw the scene I had painted—a scene of sky, sea, and land coming together. Even in raw form, it spoke of serenity and peace and the grand scheme of things. But in my spirit, I knew there had to be more! There had to be a way to not just view the scene, but to access it. It had to be a tangible, graspable, livable reality.  There had to be a way to step into it, to enter in. It was then I realized that this was the place for the gate; and it needed to be open and of kingdom size; and it needed to have the divine invitation written on it. It needed to be seen in the physical, yet be connected to the spiritual. It was to be a gateway to a place where all three—body, soul, and spirit—could come together as one. A place where true peace and serenity exist.

Maybe that’s why when I see this painting, I hear the song, “Bali Hai,”* by Rogers and Hammerstein from the musical, “South Pacific.”** Its lyrics tell of a mystical place that promises beauty, fulfillment, and perfect harmony. It is a place that calls to those with longing hearts to come to it. In the song and in the painting, I hear the clarion call of the Spirit and the Bride saying to all both near and far, “Come.” Come as you are and become one in Him in answer to Jesus’ prayer that we may be one even as He and the Father are one.

Nothing is impossible with God! He loves to recover that which is lost, forgotten, or even warped. He never loses or forgets His canvases. He knows right where we are, when to retrieve us, and how to make even the most warped canvases beautiful. My prayer is that all His canvases will hear and respond to His divine invitation. The call is going out and it will continue to draw. It is the power of God’s word going forth, and it will accomplish His purpose.

Today, I hear the Lord saying,

“It is time for the natural and the supra-natural—that which transcends the natural—to come together. The Spirit and the Bride are calling. A new day is dawning and it is time for us to awaken His love and His power within us. It is time for us to open the gate and become one with the King of Glory in body, soul, and spirit. Do not slumber or delay. The time is now. His path is being revealed to each one of us. Come to the place He has prepared for you. Do not miss this day of opportunity.” He is saying, “I have been preparing and positioning you for such a time as this. I have given you My power and My authority. It is time for you to be a gateway from heaven to earth. You are my highly skilled and gifted ambassadors. I want you to reveal My heart and display My splendor. Be confident in my strength and ability to perform miracles through you and to minister life to a dying world. The ‘gates of hell shall not prevail,’ so do not come into agreement with the enemy. (Matthew 16:18 KJV) Listen only to Me! Partner with Me! Rest in Me! Come to Me! Be one with Me! I Love You!” 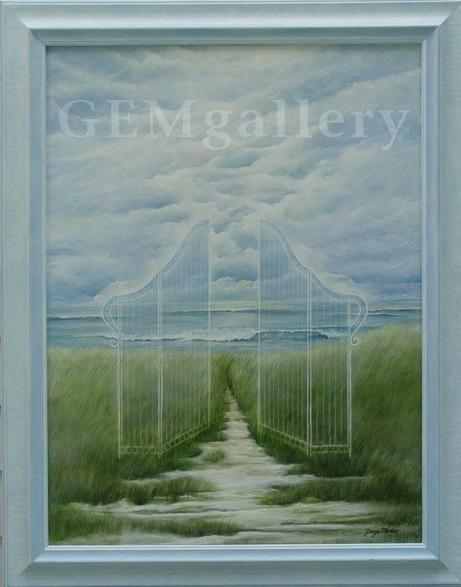