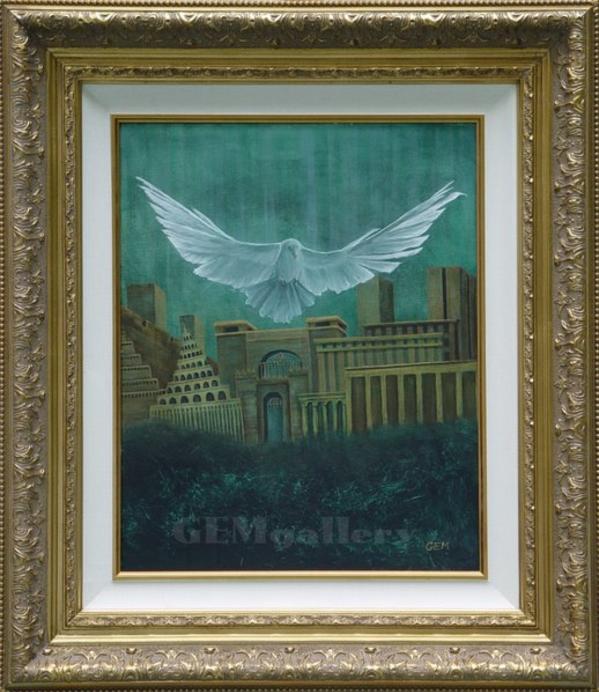 ​It all started with a dream that became a reality and is becoming a reality. I dreamed it was my first day on the job as a personal aide to the then incumbent president, George W. Bush.  I won’t go into the details—but I heard him talking about His birthday being the next day. So, I asked President Bush what I could get him for a gift.  He evidently knew I painted and said he’d like a picture of Babylon.

After I woke from the dream—I pondered his desire to get a firsthand look at the situation in Iraq—which is the modern day location of Babylon.  I researched the structures of Babylon and found a picture of Nebuchadnezzar’s gate. As history records—King Nebuchadnezzar went insane and ate grass for seven years outside his kingdom walls. At the end of which—he came to his senses and opened his heart to the Lord. With his sanity and authority restored by God—he lifted up his kingdom gates—his headship to let the King of Glory come in and rule over it all.

Some of the structures represented in this painting are: Nebuchadnezzar’s Gate, the ziggurat for education, the Tower of Babel for government (leaning like the tower of Pisa just to add a little humor), and two structures like our own twin towers representing the economic systems of the world.  From what I understand—the seven basic structures of any society are as follows:  education, media, government, religion, economy, family, and celebration.  Isn’t it time for God’s kingdom to come back into the structures of our society. Our current state of affairs seems a bit insane—without God—to say the least. Don’t you agree?

As soon as I finished painting the last building I heard the Lord instructing me to paint a dove above the structures. I was to use—as a model—an image from the cover of a CD that teaches on the baptism of the Holy Spirit. Just as I put the last touch of paint on the tip of one of the wings—an overshadowing cloud (or dove?) came over my house at sunny midday during an extreme summer drought. There had been no clouds or rain for months. So—when the shadow came and darkened my studio—I sensed the presence of God. I felt a hush sweep over me and heard that still small voice of His Spirit instructing me to “paint streaks, like rain, in the sky.” As I did—an—ever so gentle—summer rain came. Filled with reverential awe—I sat in breathless wonder.  I knew God was confirming—through this—that His Spirit is moving on His people to bring His kingdom living back into the structures of our society.

PS.  I was later informed that the day after my dream—President Bush—scheduled to go to an Australian Summit—actually took an unannounced detour to Iraq to get a first-hand look at Babylon—I mean—Iraq.